Red Carpet Jewelry: Duchess of Windsor’s jewelry to go up for auction

Hasn’t everyone been given an amethyst-encrusted Latin cross on the occasion of having one’s appendix out? No? Clearly you’re not the Duchess of Windsor. 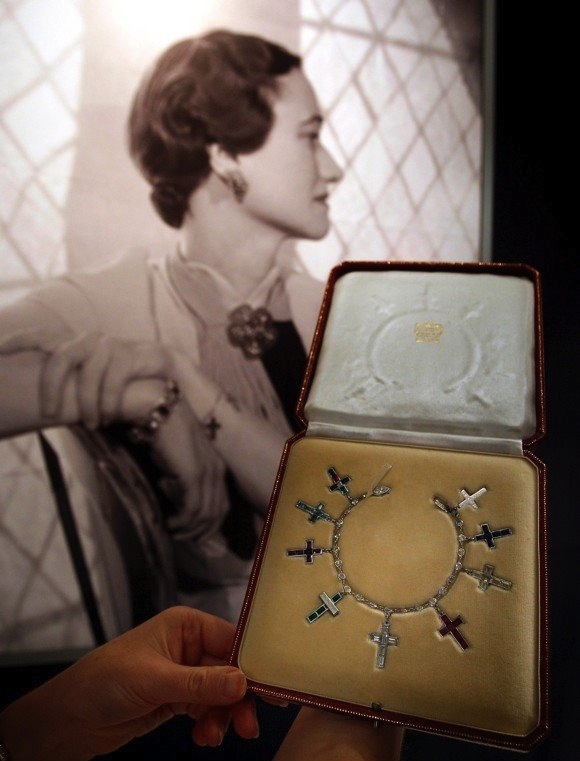 The personalized jeweled cross hangs with eight others on a Cartier diamond charm bracelet and will be included in the sale, Sotheby’s announced today, of 20 pieces of jewelry made for Wallis Simpson during her affair with and subsequent marriage to Edward VIII.

The jewels were bought by the same anonymous bidder at one of the most famous auctions of recent times – the fabulously glamorous sale of the Duchess of Windsor’s jewels next to lake Geneva in 1987 – with the 214-piece collection fetching a record price of $50 million, seven times the pre-sale estimate.

Back then, the sale at the Hotel Beau Rivage was a global event. Here were some of the most breathtaking jewels of the 20th century and all the proceeds were going to the Institut Pasteur.

The new sale is clearly not on the same scale but it does contain some important pieces and it shines a light on one of the most trawled-over love affairs of the last century which eventually led to Edward’s abdication in 1936.

By far the most personal item is the diamond bracelet with its nine jeweled Latin crosses. Each represents a special moment of the duke and duchess’s relationship so there is the marriage cross in sapphire, emerald and diamond, an aquamarine cross marking the day an Irish journalist made an attempt on Edward’s life in 1936, and the “appendectomy cross”, recalling the duchess’s operation for appendicitis in New York in 1944.

There is also a beautifully ornate ruby, sapphire, emerald, citrine and diamond flamingo brooch made by Cartier in 1940 which is, according to David Bennett, Sotheby’s chairman of jewelry, “one of the most important brooches created in the 20th century. I think that can be said without fear of being contradicted. It’s extraordinary. A work of art.”

Other highlights are a Cartier onyx and diamond panther bracelet – you can almost see muscles – a gold cigarette case decorated with a map of Europe with red lines denoting three of their favourite trips and a diamond dress suite with the inscription “Hold Tight” – a phrase the couple often used in correspondence before their marriage.

The sale will take place at Sotheby’s on 30 November.